Discussion Board : Put Ur Flickr Photo Album in to wordpress widget.
Kebutuhan : WordPress.com Account, or CMS WordPress that have been installed in the server.

If U are such a fan of photography, U must be knew of FLICKR. Yeah, Flickr is one of the photo sharing services that quite popular from Yahoo!
U can access flickr through the site www.flickr.com, and if U already have a yahoo account, U can use it for login in to Flickr with that yahoo account. Except Flickr, there are another photo sharing services such as photobucket.

Fill the detail of the flickr feed that u want to showed (like the picture above). For the flickr address (Flickr RSS URL), U can get it from the flickr page, the corner-left-under with the RSS symbol.
4. Save setting for flickr.
5. Go to your wordpress site. Your Flickr album photo is already showed according to your setting (you can customize the number of the photo thumbnailed) 😀 The picture below is a sample of the Flickr album photo in the wordpress page sidebar.

Beautiful, right? 😀 Okay, happy WordPress-ing 😀
And Take a lot on your camera ! 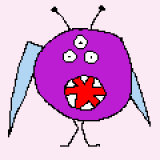